In the fall of 2005, my husband and I moved to London. He was completing his second year of law school, and I, essentially, was tagging along. I got a job working in the private insurance billing department at a hospital. I also got pregnant. Being in the family way did nothing to improve my commute to work, which involved a nearly hour ride from our studio in West Kensington.

Despite the nausea, my commute did offer me one incredible benefit: nearly 2 hours each day to dedicate to reading. I quickly learned how to jockey for a seat on the train- a task that became increasingly easier as my pregnancy advanced. The passengers on the tube were, in general, English reserved, but I learned fairly early on that they still noticed what I was reading. Case in point, I received more than my fair share of dirty looks when I read Philip Roth's The Plot Against America - the cover of which was branded with a swastika.

Maybe this public scrutiny is why I became such an ambitious reader during my stint abroad. I discovered The Modern Library's 100 Best Novels, and I determined to read at least the top ten. I passed my time on the train reading Lolita, Catch 22, The Grapes of Wrath, Sons and Lovers, Darkness at Noon. I read A Portrait of the Artist as a Young Man, but found that even public scrutiny was not enough motivation to compel me to finish Ulysess.

Turns out, London is a wonderful city for a reader. The platform walls of the tube areplastered with advertisements for new novels. My walk to the musty old library in Hammersmith took me down quaint roads, with lovely, grassy medians that were filled with wild daffodils in the spring. I got on a Margaret Atwood kick, and, one morning, in the middle of reading Oryx and Crake, discovered in The Guardian that she was doing a reading of her new book Penelopiad that very evening. And so, quite simply, that night I went and saw Margaret Atwood.

Okay, I know what you're thinking. Cue the Reading Rainbow theme song if you must, but really, it's true. Reading does allow you to go anywhere - even when you're already far from home.
Posted by Kim at 9:17 AM 12 comments:

Is it just me, or does maintaining a blog sometimes stress you out?

I am making an executive decision to start posting once a week. On Wednesdays. I'm hoping a schedule will help rid me of the anxiety I start to feel when I haven't posted in awhile.

What about you? Do you have a blogging schedule? If so, do you find it helpful?

Last week I heard of a new study that, in short, found that "make-up makes women seem competent." Did you hear about this? I encountered the story on the radio, tv, and internet. Apparently, this was big news.

My interest in the headline lies in that pesky word "seem." I recently read a book on writing where the author stated that women tend to use "seem" more frequently than men, and that, more often than not, this word weakens their writing. So, ladies, if you're hoping to come across as competent, cake on the mascara and start slashing "seem" from your manuscripts.

It's easy to see how "seem" can weaken a statement. Compare "It's cold out," to "It seems like the breeze is bringing the temperature down a bit." Or "I was mad" to "It seemed like the way that he reacted to my statement made me angry."

I have a tendency to use "seem" in my writing. I also have a tendency to preface questions with an apology, and to qualify statements I make about almost anything.I'm trying to resist these tendencies, but it's not easy. Just the other day, my sister asked me to proofread a paper for her. I was surprised to find that my sister, who is, quite simply, brilliant, had riddled her paper with that unseemly word. I typed out a comment in the margin, and then, after I read it, I couldn't help but laugh. The comment said: "It seems like you are using 'seem' a lot."

What can I say? Old habits, be it blue eyeshadow or self-doubt, die hard.
Posted by Kim at 9:13 PM 10 comments:

My husband and I were watching TV yesterday when we happened upon an interview with the pastor and John King. John King listened as the pastor explained why Mormons aren't Christian. King then read the rebuttal from The Church of Jesus Christ of Latter Day Saints, but in the process mangled the name, conveniently omitting the "Jesus Christ" part, as if even he wasn't willing to concede the point.

I winced as I watched the news story, although, really, I shouldn't have batted an eye. The pastor's claim is anything but breaking news. My church has been branded a cult before, and it will most certainly be branded a cult again. But the label still stings, because "cult" is evocative of brainwashing, isolation, and mass suicide. It doesn't describe the experience I personally have had as a Mormon. My church has given me a sense of purpose. It has given me tools to build a strong marriage and family. It has taught me how to serve and sacrifice. It has taught me of Jesus Christ, of His ministry, and encouraged me to follow Him. It has inspired me to reach my full potential. If my church is a cult, then cults are great!

We resist labels, and rightly so. Labels tend to have a certain tenacity about them: Obama is a Kenyan, Muslims are terrorists, Mormonism is a cult. We resist labels because they give other people the power to define who we are. Labels strip us of our humanity. Labels interfere with our ability, and need, to be understood.

And yet, labels are inevitable. If we must be labeled, we want to be in charge of the process. This is why we Mormons insist that we are Christians, even though the Christian community, for reasons both semantic and theological, dismisses this claim. As I watched the exchange with the pastor and John King, I tried to understand what the pastor was saying. Yes, Mormons are not traditional Christians. And no, I cannot really step outside of my framework, my experience, and see myself and my religion through the eyes of someone else. This is why I try to avoid making blanket statements about Jehovah Witnesses, Scientologists, and even Evangelicals. Sometimes, what you are and what you are not depends on what side of the line you are on.

It may be naive, but I have been surprised by the vitriolic comments that have been directed at "Romney's religion." The pastor's remarks have momentarily revived the debate of who can claim to be "Christian," and I can see the argument progressing like so many rounds through Sylvester McMonkey McBean's branding machine, each participant hoping to wear their Christianity like a gold star. In light of whose name is being professed, it all seems a little absurd. After all, Christ rejected labels, seeking company with publican and scribe, saint and sinner. In the end, if I am considered Christian doesn't depend on how I or anyone else labels me. It depends on my heart, where no label can adhere, no matter the amount of pressure applied.
Posted by Kim at 8:39 PM 12 comments:

You won't find this in your E-reader

Today, I picked up a book I had on hold at the library. I was flipping through the pages, and found this: 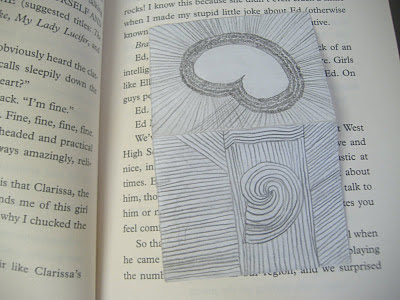 And (even better) the other side of this hand-crafted note: 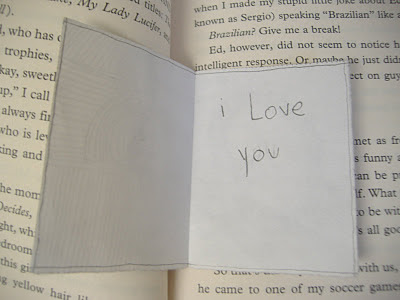 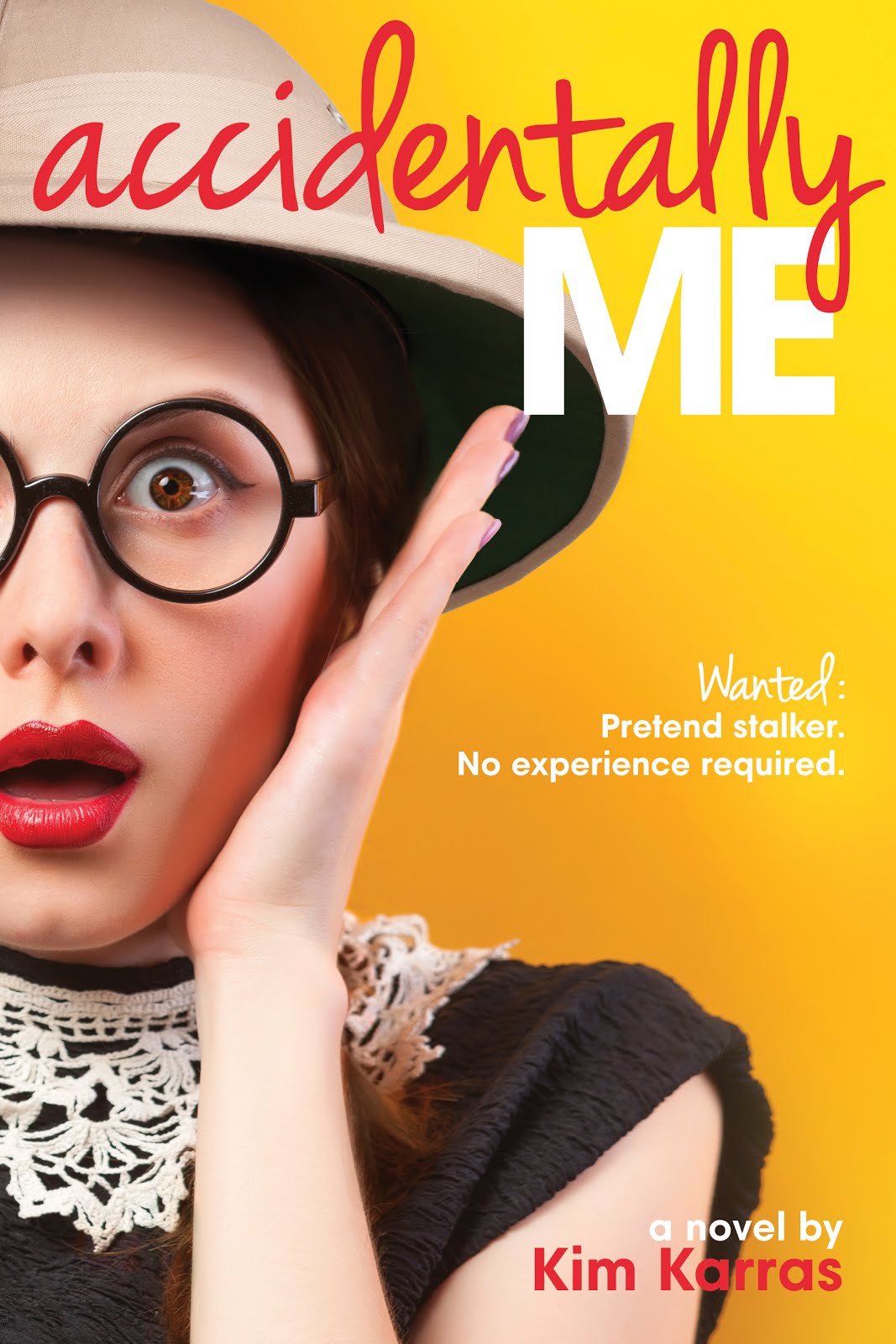